AlphaGene offers its gilts the luxury of a new nucleus

You are here:
News 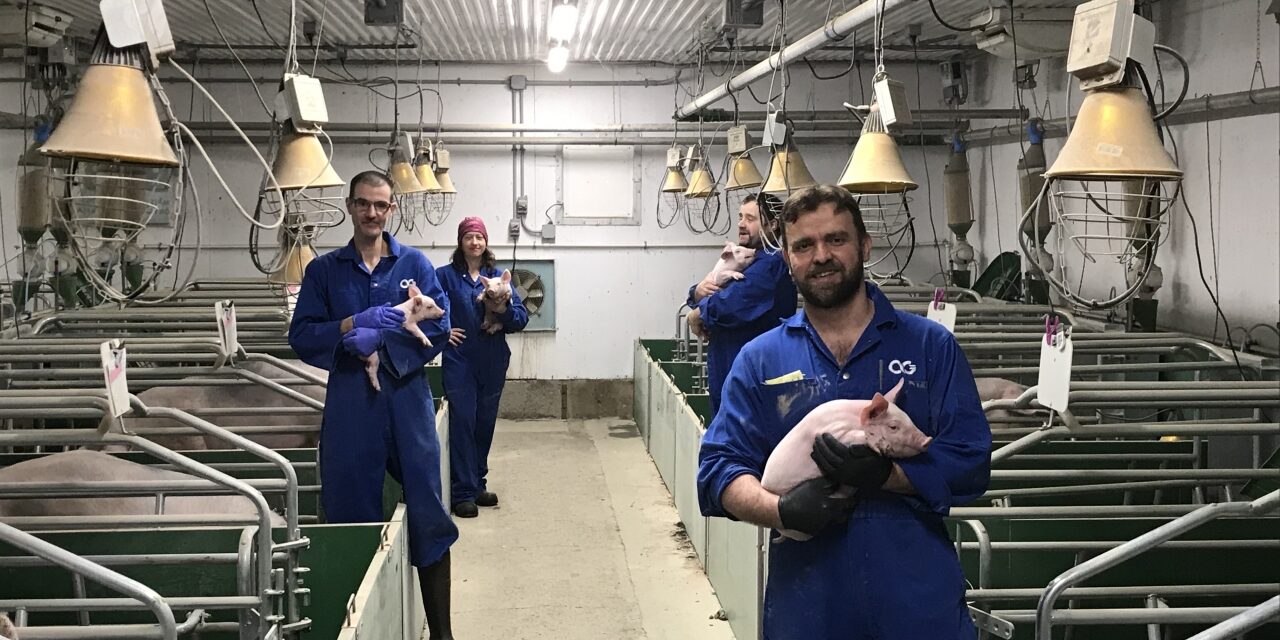 Photo: “Staff working in the nucleus are our eyes,” says geneticist Nicole Dion. “They tell us what they see, they send us photos if they are not sure what they’re looking at. They keep in regular touch with us.” Left to right: Stéphane Pelletier, Nathalie Morissette, Sylvain Labrie and Sébastien Proulx. Missing at photoshoot: Jean-Claude Beaupré, Benjamin Beaupré and Daniel Cimon (credit : Olymel).

AlphaGene offers its gilts the luxury of a new nucleus

Original article by Guylaine Gagnon, Editor in Chief at Cooperateur

While producers are adopting their facilities for the group housing of sows, AlphaGene is taking measures to develop animals that have the social skills to live in groups.

“It was important for us to have a nucleus that closely resembles typical commercial rearing operations and that meets the new animal welfare standards,” explains Olymel geneticist Nicole Dion. She adds in passing that AlphaGene doesn’t just sell its genetics in Quebec but throughout Canada.

Animals that spend their lives penned and those that live in more open settings don’t necessarily display the same types of behaviour towards their siblings, she says. Pigs are naturally inclined to live in groups, but some are more sociable than others. “That’s why it’s important to select animals that adapt more easily to communal living,” Dion says.

The development of genetics for precise criteria generally takes a whole year, she says. You have to run through the entire cycle, namely gestation, farrowing and rearing of piglets.

The sows that make up the nucleus at Saint-Valérien come from different AlphaGene finishing sites. Later, they will self-replace with gilts coming from sites directly linked to the Saint-Valérien nursery, namely the region’s fattener-growers who are also Purdel Coop members.

Dion says that in the new Saint-Valérien herd, there are two activities: selection and multiplication. It’s a non-standard practice but one that has its advantages, says the geneticist.  She cites the example of two sister gilts:  she will keep the sow in the nucleus that she thinks will be the best performer on the basis of the genetic values she obtained, and the other will be sent to multiplication. “But sometimes I get it wrong, and the one sent to multiplication proves to be the better of the two. » If that’s the case, the specialist can simply recall the sow for selection, as she is in the same building. It’s a practice that accelerates genetic improvement, according to Dion.

Animals selected by AlphaGene are known to be calm by nature. “The people that work on our farms have a soft touch and do not tolerate aggressive animals,” Dion assures.

This peaceful environment can only make adaptation to life in groups easier for gilts, “and that becomes a criterion along with the others, such as litter size, gilt quality, milk capacity and maternal instincts, says Marquis Roy, Olymel’s technical director. “In herds our clients have converted to group gestation, we quickly noticed that our animals were well adapted. The mortality rate and hoof problems did not increase, unlike in herds that did not use AlphaGene genetics.

Recall that AlphaGene has maintained a longstanding partnership with Axiom Genetics (formerly Gène+), a French company specialized in porcine genetic development.  However, in Europe, “they’ve been working with group nuclei since 2014,” says Roy.  “Perhaps that’s why our animals display a certain natural ability to live in groups.”

Furthermore, AlphaGene genetics are not lacking in other qualities. “They are very prolific animals that wean a lot of piglets in each litter, and they are vigorous piglets,” Dion and Roy agree.  They are also animals that, in finishing, display very good feed conversion and substantial rates of growth. They meet the needs of the sector as a whole, and those of Olymel, in terms of carcass and meat quality.

AlphaGene rebuilt the gestation section of a building that houses 1200 sows and 3600 nursery places. It also built 12 group stalls that will accommodate 60 sows each along with three feeding stations per group stall. Sows can access them one at a time and a door closes behind them so they can feed undisturbed. The IEL company supplied the equipment, which is fully automated using Maximus technologies.

This section was also completely refurbished.  The number of rooms was reduced, but the number of pens was maintained at 224. “We used space formerly located in front of the sows to enlarge the pen size to 1.8 m by 2.4 m [6 ft. by 8 ft.], instead of the 1.5 m by 2.1 m we had pre-renovation,” says AlphaGene Director Sylvain Faucher.

In terms of feeding, the animal needs to press on a lever for the distributor to activate.  “Unlike in the gestation area, where feed quantities are limited according to a feeding curve that reflects the state of the animal’s physical development and a sow’s stage of gestation, here it’s an all-you-can-eat buffet,” Faucher jokes. Of course certain measures  are at work to prevent food waste.

Very little work was done in this section but AlphaGene updated most of the equipment. All pens meet industry standards. Here as well the feeding system distributes rations in line with an animal’s physiological state and the condition of its meat.

Production is carried in intervals with a 4-week spacing. A group of 224 sows farrow over periods staggered by 3 to 4 days. All piglets are weaned on the same day at an average age of 20 days, then are transferred to the nursery.  This has a number of benefits for staff in their work, but the biggest is how it provides an opportunity to empty, clean and disinfect the section every four weeks.

In addition, producing a large number of piglets of the same age at weaning makes All-In–All–Out management of nurseries and fattening pens possible. “We cannot sell genetics if we don’t have exceptional health status ourselves,” Faucher says. “At AlphaGene, we maintain excellent levels of health and All-In–All–Out management is absolutely essential to keep it that way.”

AlphaGene has two other nuclei, where rearing is carried out in pens and then later converted allowing for more freedom of movement.  Olymel’s porcine subsidiary raises three breeds: Landrace, Yorkshire and Duroc. By making the Bas-Saint-Laurent region its pool for genetic selection, it’s looking at doubling nursery production according to AlphaGene’s director.

Faucher thanks the people at Purdel for offering up their Saint-Valérien nursery to Olymel. “That gave AlphaGene the chance to pursue development in a secure area when it comes to the health of its livestock,” he says.

The director also recognizes the confidence the region’s producers have shown in Olymel. By accepting piglets from AlphaGene’s nursery, they are contributing to the production of future breeding stocks that are in good health and with high genetic potential.

Original article in French Only: https://cooperateur.coop/fr/porc/article-technique/alphagene-offre-ses-cochettes-le-luxe-dun-nouveau-nucleus